“Dad, you’ll see it’s not that difficult!” “Grandma, coding is really great!” “Mom, we’ll download the app, and practice some more at home.”

In the Primary School No. 58 in Poznan during Europe Code Week pupils in third grade helped the older generation in their families with their first steps in programming. The kids became role models for their loved ones.

Anna Cieślarczyk, is teacher of mathematics and computer science in the Primary School No. 58 in Poznan. She managed to bring together two completely different worlds: the first with parents and grandparents, who still remembered the times without computers and the Internet and the second of 9 year olds, for whom the tablet is just a natural part of the environment as a toothbrush, and the term “virtual reality” is not surprising. 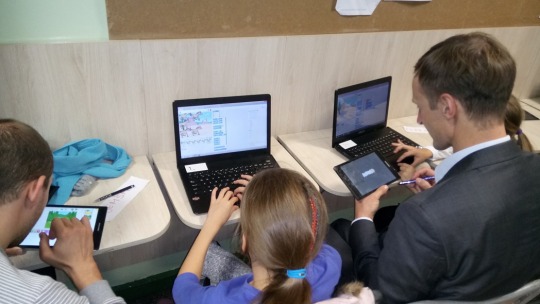 The two worlds were connected during the workshop called “Encoding on the carpet”,where pupils presented previously gained coding skills to their parents. The little ones invited their relatives to the magic of the digital world and created simple animations in Scratch together with them.

“Coding on the carpet” showed that a tablet is a tool that does not need to be feared. It showed parents that their children can acquire new knowledge and skills useful in adult life. You only need to know how to use it wisely. Coding classes during the Code Week Europe allowed parents to say their first words in the language of the future.