Every October in the school year, numerous additional activities are planned to contribute to Europe Code Week that aims at bringing coding, programming, and digital skills to everybody in a fun and engaging way. In order to prepare pupils for the technologically advanced modern world, it is very important to introduce them to coding. This, in turn, helps children to become open-minded, curious and always on the path of innovation by:

– deploying new technologies through the development of artificial intelligence, opening up unlimited possibilities for research to all who are curious and eager for new knowledge and learning;

– acquiring the skills of thinking outside the box, logical reasoning, problem solving, patience and perseverance.

Pupils approach these workshops with a great deal of excitement, joy and curiosity, which is the most important and sometimes the most difficult goal for teachers to achieve today.

This year’s Code Week activities took place from 9 to 24 October with numerous activities in countries across Europe, and our school added some of our activities to the Code Week map.

The first activity was related to symbols, encoding and decoding and computers were not used, they were unplugged. The students used symbols to display data and, through an activity called Our Secret Language, they created their own secret classroom alphabet to send each other secret messages. Students also learned Morse code and how it was used in World War II. Using Morse code, they wrote down their names and sent messages to friends who, in order to understand it, needed to decode the message.

The second activity in the third grade was conducted using a computer and the code.org website, where the students programmed a dance party. We first watched and commented on the videos, after which the students, following instructions, independently programmed the movement of the characters on the stage with simple blocks in time to the selected music. 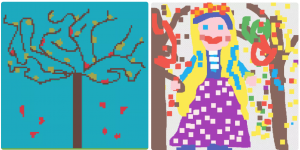 Fourth grade students were included in an online workshop held by teacher Valentina Blašković from Ogulin First Elementary School, who led them through interesting activities in which students coded a game in Scratch. The workshop was held through the MS Teams platform in which all participants got involved and followed the teacher’s instructions, answered her questions and, by the end of the class, everyone had their own finished game that they programmed themselves. 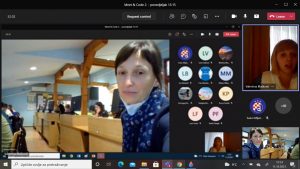 The students programmed in the online version of Scratch, which the teacher briefly explained to them: where the command blocks are, how we recognise them and what colour they represent, where the programmes match, and where we can see the execution of the programme. In the second part of the workshop, held the week after, the same participants programmed the game in Scratch, this time featuring a character that the player moves to jump over moving obstacles. The pupils also worked with memorised variables through the game.

The AI workshop How old do I look? introduced students to the basic concepts of intelligence and artificial intelligence and its current and potential ways of application. In addition to seeing examples of where artificial intelligence is used today, students created a programme in the online version of mBlock that included a camera on a laptop / tablet that analysed the face in front of the camera and printed: an assessment of age, gender, hair colour and whether the person wears glasses and if so what kind of glasses (sunglasses, swimming goggles, ordinary glasses). In addition to teaching students how to use artificial intelligence capabilities to recognise faces and facial features, they also repeated basic algorithmic structures: sequence, repetition and branching. 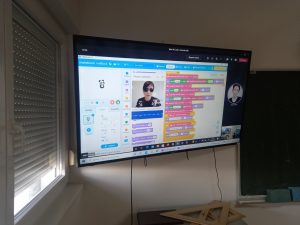 In the second activity, students danced and programmed a dance party, part two – Keep On Dancing, you can find links to some of the pupils’ dance parties below.

Seventh-graders studied some of the possibilities of artificial intelligence and tried out several chatbots, including the first chatbot Eliza, and QuickDraw – a game created using artificial intelligence that asks the user to draw something, which the user does, and the game tries to guess what the player has drawn; it does this based on the many images it has learned (machine learning). Thanks to each game and drawing, the game learns to recognise different shapes. As the game was made in English, students did not know all the words they needed to draw and often had to use Google Translate. This was also a great motivation for us and an introduction to the activity of programming our own translator in Scratch. The students used the Translate and Text to Speech extensions and created the My Translator programme, which translates the desired word into any language and pronounces it in the chosen language.

Here is the link to an English translator.

In the eighth grade, a workshop called Artificial Intelligence and Machine Learning was conducted, where students studied various aspects of artificial intelligence and “taught” the computer to be intelligent. In the first activity, we used ready-made content from code.org, AI for oceans, where pupils learned about machine learning and the ethical use of Artificial Intelligence, after which the students began machine learning by classifying the images as “fish” and “not fish”, to remove garbage from the ocean. This was followed by expanding the training dataset to include to other sea creatures.

Pupils choose their own tags to apply to images of randomly generated fish – the shape of the fish, the feel of the fish, the colour of the fish. This training data is used for a machine learning model that should then be able to tag new images independently. Students follow the instructions and independently (with minimal help from the teacher) complete all the steps of machine learning, and finally test their programme and download and share their certificates.

In another activity, students created a machine learning model using the Teachable Machine tool which taught the programme to distinguish between a cat or a dog in the picture. After creating the model in the tool, the students uploaded it to the Pictoblox programme in which they created the programme itself- an animal classifier.

In addition to the abovementioned activities, throughout October, students programmed and made their first games in various tools and engaged in the creation of their own digital work using modern information and communication technology. Joining the initiative of the EU Code Week brings us a lot of new knowledge and ideas every year, and we are already looking forward to the challenges of next year.