European Code Week starts already on Saturday and I’d like to invite you to support it on social media.

We’ve set up a Thunderclapcampaign to spread the word about Code Week all over Europe. We would like to ask you to join this Thunderclap campaign and inform also your community
& audience about it. 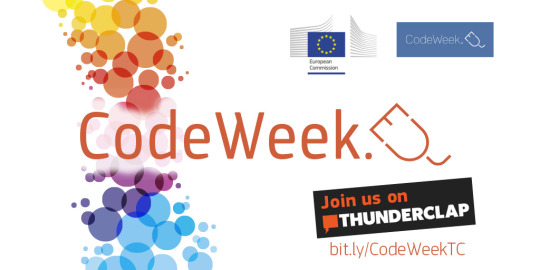 How long does it take to join the Thunderclap Campaign?

What is a Thunderclap Campaign?

It is a campaign on social media – Twitter, Facebook & Tumbler. The idea is that huge crowds of people send the same pre-defined message at the same time. This is done automatically through Thunderclap. In our case we want 500+ people to send this message on Saturday 10/10 at 9:00 am CET to celebrate the start of CodeWeek: “#CodeWeekEU starts today! Join us & bring your ideas to life #CodeEU http://thndr.it/1id14OV”

The link points to the map where people can find events nearby.

So in the ideal scenario there will be 500+ messages on Saturday 10/10 sharing this news.

Why do we need your help?

How do you join the campaign?

Go to http://bit.ly/CodeWeekTC and choose to support it via Twitter, Facebook or Tumblr (or all the 3 together). You’ll be asked to sign in your profile on the selected network (if you’re not already signed in). Then you’ll be asked to authorize Thunderclap to send this one-time message from your profile. When you support the campaign you will see your profile picture among the Recent Supporters at the right bottom of the Thunderclap Campaign profile. This means you’re in and your profile will send the message.

Can you customize the pre-defined message?

Yes. After supporting the campaign you authorize the message which will be sent from your account at the given time. I suggest to keep the message as it is but if you want to add or delete something or translate it in your language, you can certainly do it. Just keep there the hashtag: #CodeEU.

Do you want to help more?

You can share the information about the Thunderclap campaign through your social media channels so that your friends and followers can participate as well. We would be really grateful for that. Just remember that the campaign is scheduled for Saturday 10/10 9:00 am CET so whoever might want to support it has to do it before that day and hour.

If you have any questions send a Direct Message on Twitter to @DigitalAgendaEU or @CodeWeekEU.