Learning to code with children in Europe and Africa: unveiling the true power of coding workshops!

Seeing a smile on children’s face as they discover something new and exciting is simply priceless, and the satisfaction brought by the sparkle in their eyes is enormous and truly rewarding. Following Einstein’s conviction that “the only source of knowledge is experience”, we set ourselves on a journey to equip young people in Africa with a set of skills that are essential in all walks of life, in a fun and creative way. We introduce them to logical thinking, problem solving, creative thinking, storytelling, team work and communications. How are we doing it? By teaching them the basics of computer coding. I cannot go on without admitting how, as political scientist, I was giggling along with kids as I wrote my first lines of code. 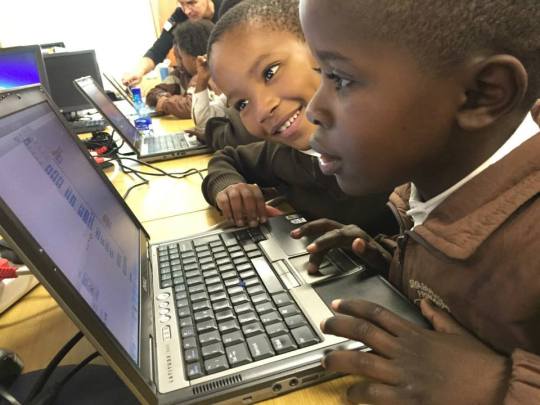 Learning how to code – like poetry, history or maths – opens up young (and not so young 😉 minds to new ways of thinking and creating. Because coding skills enable them to master the technology, suddenly they are more than mere users of technological solutions: they become creators of innovation. At the beginning of each coding workshop, when asked who is more intelligent, humans or computers, many children answer ‘computers’. While taking their first steps in robotics, children then realize that telling the robot to ‘go to the end of the room’ is not enough for the robot to understand and obey. However, when they say ‘robot, stand up’, ‘robot, move 10 steps’, ‘robot turn by 180 degrees’, their joy builds up as they see the robot listening. When they write down their first commands in the Scratch interactive online tool, it suddenly dawns on them that they are now in charge of the machine and they can instruct it to do exactly what they want. They learn to give clear commands, to carefully plan each step so as to achieve a desired result. It’s just like project management or writing a movie script, so the skills we learn through coding may actually be used in a wide array of contexts.

Building on the success of the EU Code Week set up by the European Commission across 38 European countries last year, these coding workshops are part of the Africa Code Week initiative launched by SAP, Simplon.co, Ampion, the Galway Education Centre, the Cape Town Science Centre and the King Baudouin Foundation. In October 2015, this continent-wide initiative will bring
hundreds of coding activities to 20,000 kids and youth from 3 different age groups (8-11, 12-17 and 18-24) across 18 countries. 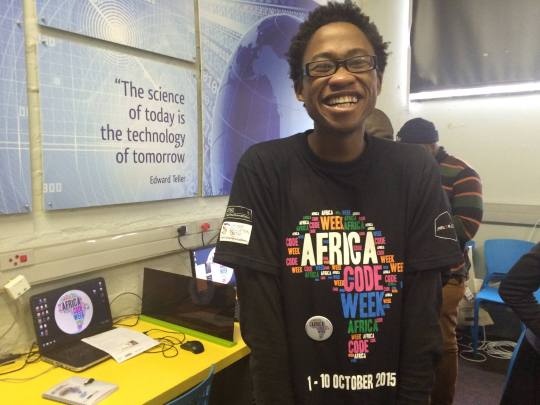 The goal is to equip future generations with the coding skills they need to thrive in the 21st century workforce and become key actors of Africa’s economic development. With the role technology plays in our daily lives and across economies and industries, it is clear that coding skills will be the key to successful careers in the future, whether today’s children become tomorrow’s leading
entrepreneurs or join the digitally skilled workforce companies need more and more, everywhere.

By fostering interest in creative computing through hands-on, interactive and fun learning, the EU and Africa Code Week initiatives are powerful ways to spread digital literacy across continents and start shaping tomorrow’s highly skilled workforce: tech savvy men and women eager to drive social and economic development in a digital world that changes at the speed of light.

Education is the most fertile soil for personal development and future economic growth, the same way proper food helps our body grow and stay healthy. As Nelson Mandela once said, ‘Education is also the most powerful weapon we can use to change the world’, which ultimately translates into increased income, reduced poverty and a more peaceful society.

And by the way, if a political scientist could learn and master coding basics so quickly, then trust me, everybody can!