#SWITCH! – the biggest ICT and entrepreneurship event in the Baltic region – takes place 8 to 9 September 2016. Coding is at the heart of the event and the plan is to launch the biggest coding lesson in the world and set the Guinness book of world records.

#SWITCH is founded by Antanas Guoga, a Lithuanian Member of the European Parliament and a supporter of EU Code Week. After a successful edition in 2015, #SWITCH! aims at going bigger, better and stronger in 2016. More than 10,000 participants are expected. The theme of the event is the European Digital Single Market and is split in two parts. One part focuses on workshops for businesses held by inspiring e-businessmen and companies who share their experience in the field and officials of the EU institutions. The other part focuses on young people. The highlight of the event is to have the biggest coding class in the world. Children from Lithuanian cities and provinces will join the coding lesson and will learn a new skill, have fund and hopefully break the Guinness world record. 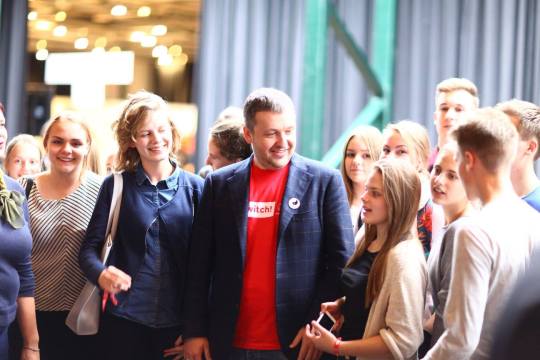 #SWITCH! is all about youth – thousands of students participate in this event and get a chance to experience the digital world first-hand.

’’#SWITCH! is dedicated to people, who are interested in the digital future. If one young participant takes a different path in the future inspired by this event, my goal will be achieved. If one entrepreneur gets useful information and contacts with a digital business giant that will help him or her foster their business and create value-added to their country, I will be sure that time and efforts have been well-invested. If a modern and progressive eGoverment initiative is born in at least one governmental institution, I will call it a success”, said Mr Guoga.