Over 70 EU Code Week Ambassadors from 34 countries are helping us spread the word about #codeEU throughout Europe. Who are they and why did they get involved in Code Week? We’ll be running a series of interviews and get to know them better. The interview session was started by Bastien Guerry from France, who interviewed his colleague Alessandro Bogliolo from Italy 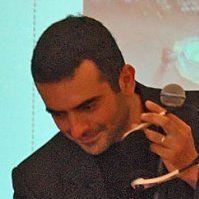 Alessandro, who are you?

I’m a computer scientist, I’m a father of two teenage girls, and I coordinate the School of Information Science and Technology at the University of Urbino.

Computer skills have been recognized to be a top priority by all the last Italian Governments, but no significant investments have been made in the last decades to develop such skills.

At secondary school, Computer Science does not appear among the subject areas, while Elements of Informatics are part of the program of Math. The only exceptions are the “Applied Science” option of Scientific Lyceum (pdf here) and the ICT curricula of Higher Technical Institutes (pdf here). Coding is included among the target competences only in these specific curricula.

In higher education, the situation does not change. There are very good schools of Informatics and Computer Science which form skilled coders, but coding is usually not included in the program of study of any other degree program.

Hence, so far in Italy, it has been likely to graduate without even knowing what coding means.

Now things are changing! First of all, we have in Italy very talented coders and highly motivated teachers who have been providing great non-institutional learning opportunities to young people. Second, the Italian Government has endorsed the CodeWeek initiative and decided to leverage the great potential of online resources (starting from the ones made available by Code.org) to fill in the gap and introduce coding at school!

I’m involved because I see in Code Week an extraordinary opportunity to raise awareness and to bring grassroots initiatives under a common umbrella in order to reach the critical mass required to make the difference! I firmly believe that the European dimension is the most appropriate one for this type of actions.

I joined Code Week last year as soon as I heard about it. Then I created an online learning community, called “Code’s Cool”, in the attempt of making every week a code week!

I have many and no one in particular. Every time I hear about a simple idea that comes to success just thanks to a mix of creativity and coding skills, I feel the same emotion. Every time I see an algorithm that provides a smart solution to a problem, I find it beautiful as a work of art. My Code Week heroes are all the young talented people who are continuously sharpening their coding skills to be prepared to face new challenges and amaze all of us.