As a computer science teacher, coding, computational thinking, robotics and artificial intelligence activities are the core of my teaching. All my students, from 1st grade (6 years old) to 6th grade (11 years old) participate regularly in the European Code Week as well as in many STEAM projects where technology is used to solve real-life problems.

From 9 to 24 October 2021, 18 classes and 390 students from the 2nd & 3rd co-located Primary Schools of Nea Erythraia, Athens, took part in the EU EU Code Week initiative by implementing 21 activities.

I decorated the computer lab with code-week stickers, put on my orange code week T-Shirt and began working with my students on the new feature of EU Code Week 2021, the ‘Challenges’. 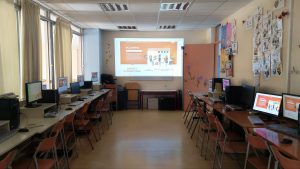 The 6th graders created a paper binary circuit (using 1 battery, 8 LEDs and copper tape) to send a secret message by toggling the 8 LEDs ON or OFF on the circuit, using the binary code alphabet. They first experimented on how to build their circuit by using the free ‘Gcompris’ software. They were excited about paper circuits and are now eager to create Christmas paper circuits cards in December. 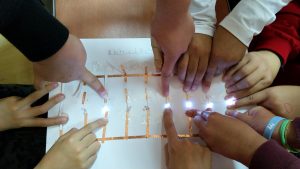 The second activity was about encryption and decryption using the Caesar Cipher.  They enjoyed sending secret messages from one to others and laughed a lot when they were decrypting the messages. 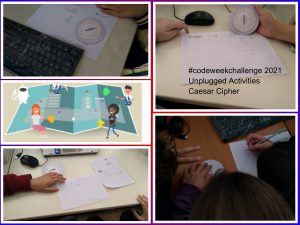 Their third activity was to train an Artificially Intelligent Agent to fight fires using the Minecraft for Education Demo. I have never seen them so excited. 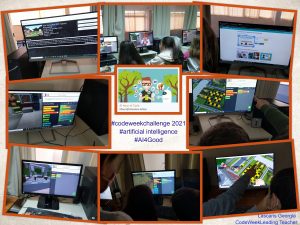 The 5th-graders participated with the Scratch activities “Grow A Virtual flower field” and “Silly Eyes” within the eTwinning project “Let’s explore the World of Technology”. Boys and girls loved the flowers and were extremely amused by moving the eyes of their sprite with the computer mouse. Many of them had the idea to change spontaneously the code, and make their sprite’s eyes follow some other little animal’s moves, creating this way an animation of predators and prey. I love my students’ creativity. 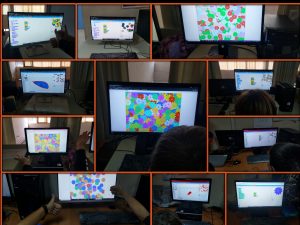 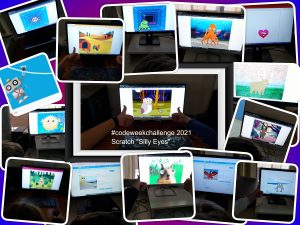 They also created drawings with geometric shapes with Scratch and finally used their BBC Microbit to create a “Calming LED” choreography.” 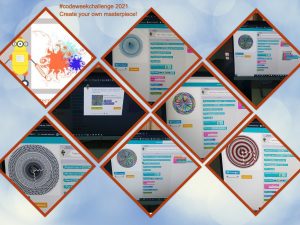 The 4rth-Graders had a Party Dance with the ‘Ode to Code’ music! They coded their choreography, voted the one they liked the most and danced it all together. They had a lot of fun, and we made a lot of noise that day.

The 3rd-Graders learned about the fundamentals of coding with two fun activities, “Star Wars” and “Angry Birds” from code.org. They were excited to receive their certificates.

The 2nd-graders took their teacher role very seriously in which they taught an Artificially Intelligent little robot to keep clean the oceans with the “AI for Ocean” activity. They were so proud when their robot was able to accomplish its mission without mistakes! 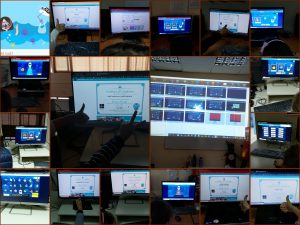 Finally, the 1st – graders used ‘ScratchJr’ to code their first animation. They were so excited about this new tool that they mostly ignored all my instructions and started experimenting by themselves, trying new sprites, backgrounds and playing with commands. I was as much as excited as they were. 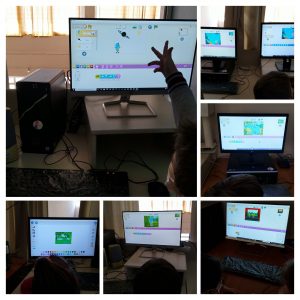 Those last two weeks were full of coding activities, fun and creativity. I will always remember my students’ shocked answers when I told them that Friday was the last day of EU Code Week. “What? We will not code anymore?”  No, my dear students, the code week may be over, but not the coding.