The #CodeHunting game is on across Europe

By Lorenz Cuno Klopfenstein, from the University of Urbino 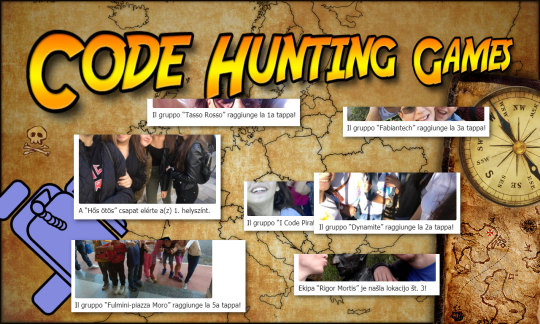 Last year, during a summer school organized by the University of Urbino, a team of  programmers patched together a simple treasure hunt game, combining a Telegram bot, QR Codes, and coding puzzles. The game saw 26 teams and 139 participants competing for the prize, in a fun summer evening in Urbino. Little did the programmers know that the same bot would be appointed to run a much larger treasure hunt event, during Code Week 2017.

But, that’s what’s happening on Saturday 14 October at 11:00, a large number of simultaneous coding treasure hunt games will be run in several cities around Europe. Games will be coordinated by our enthusiastic Code Week Ambassadors and other very committed local organizers. We are still gearing up for the event, but we are expecting a large number of teams.

Each local game will see a number of teams competing with each other: the treasure hunt bot will assign a sequence of 8 locations to reach. At each location, the team leader must first snap a selfie of his or her team at the right spot, and then solve one of many coding riddles prepared for the occasion. Once all locations have been reached and all riddles have been solved, the bot discloses one final location, where the final coding riddle must be solved. The first team doing so wins the game.

Moreover, teams will not only compete for the victory in their local treasure hunt, but also compete at an European level against all teams in other simultaneous games. The overall winners and the global leaderboard will be disclosed after the event.

If you’re wondering how a treasure hunt via Telegram bot looks like, here’s a demo video of a short game through the streets of Urbino.

If you’re just curious to see our ambassadors testing a preliminary version of the game in Brussels, here’s the video.

Thank you to all our ambassadors.