The secret of the encrypted book at Public City Library Nova Gradiška, Croatia

EU Code Week is a great initiative which brings coding, programming and digital skills to every school and institution where there are motivated individuals willing to bring together pupils and other enthusiasts by organizing coding events. For many years, I have been organizing numerous activities in the elementary school where I teach, the“Matija Gubec” in Cernik, a small village near the town Nova Gradiška. In the past few years, I mostly organized activities in cooperation with the city library, using as a hook the celebration of Croatian book month and Europe Code Week.

The activities were announced with prepared posters, also on social networks. 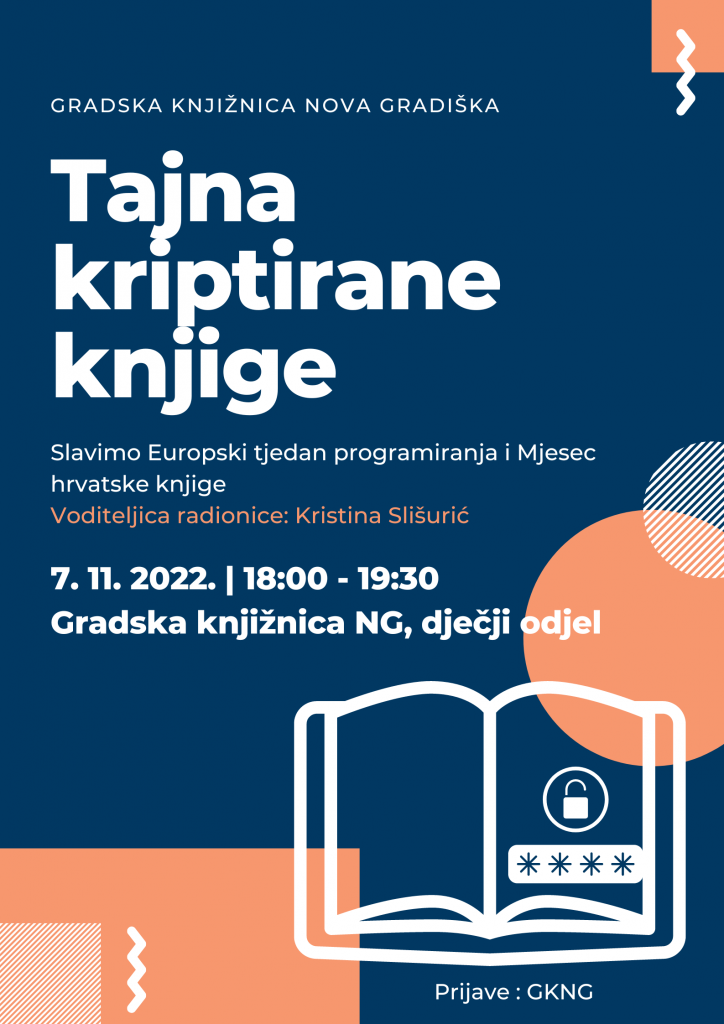 This year Code Week took place from October 8 to October 23, with numerous activities taking place all across Europe; the public city library, located in Nova Gradiška  added their activities to the Code Week Activities Map, including The secret of the encrypted book.

This unplugged – computers were not used – activity was related to symbols, encoding and decoding. The pupils used symbols to display data and they practiced computer thinking through teamwork, games, solving problems, recognizing and separating important information from irrelevant information, checking facts, collecting data by observing patterns, breaking down problems into smaller parts, creating algorithms, making decisions on systematic and objective way and all this with pleasant socializing and without the use of technology.

At the beginning of the workshop, the teacher introduced herself in an unusual way – she wrote her name in strange characters, which the pupils soon learned were part of the PIGPEN code, which they would later learn more about. 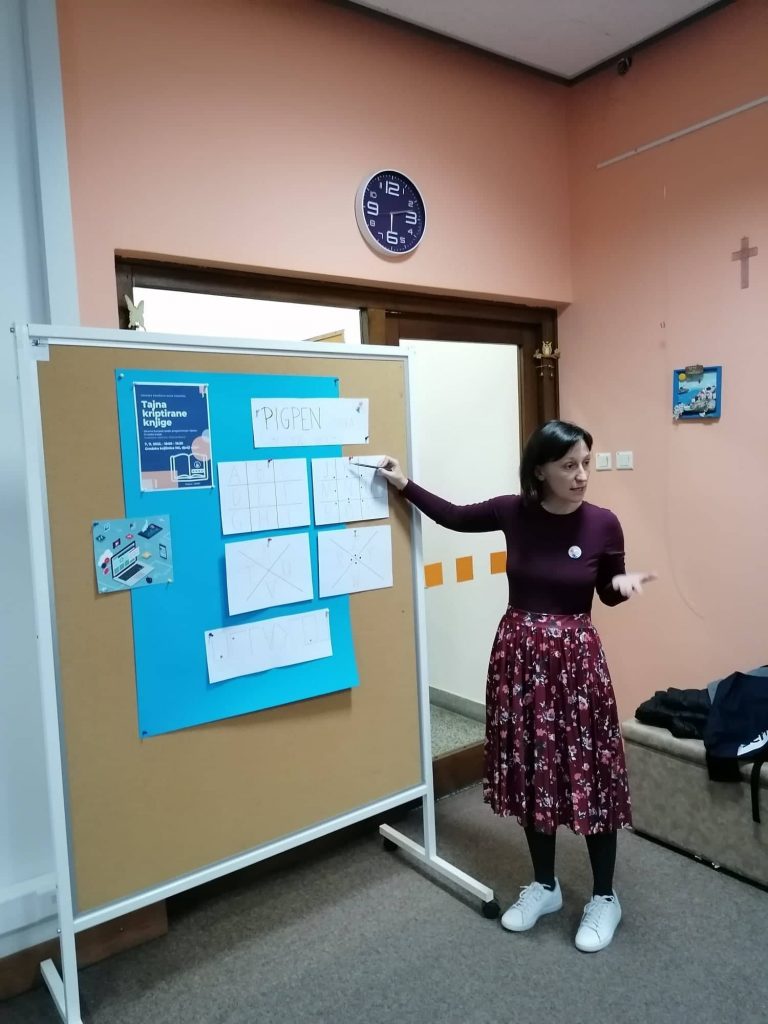 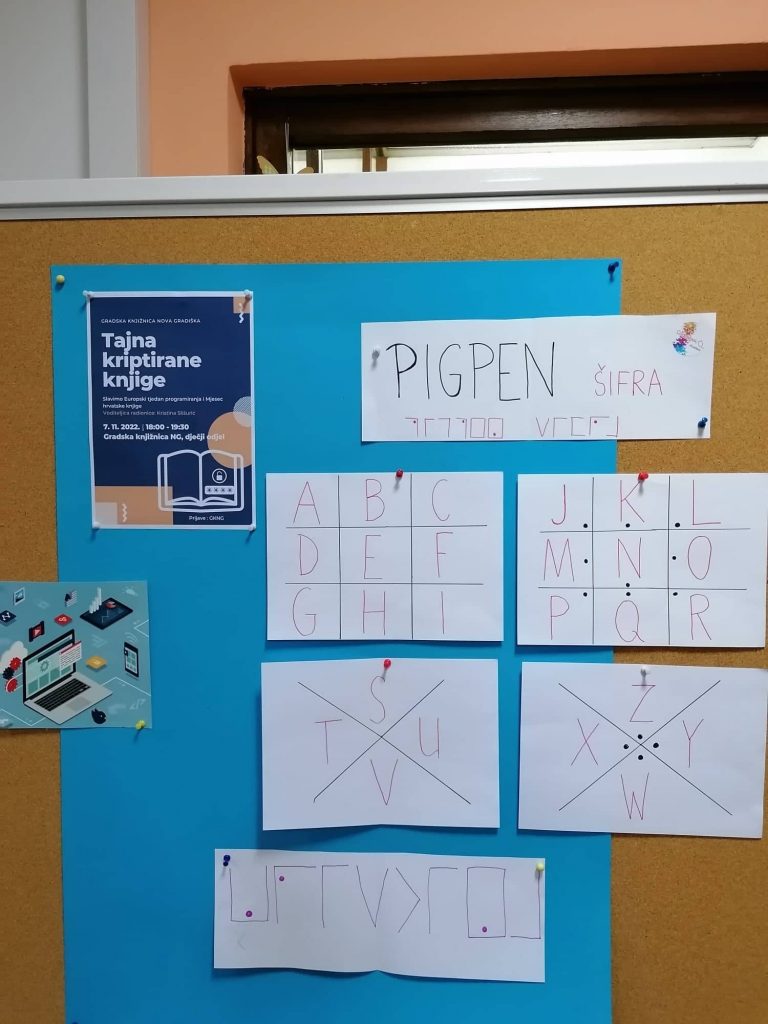 Afterwards, all participants were invited to write their names using that code, as well as Caesar’s code, an additional one they have been taught during the workshop. The teacher explained a brief history of encryption and coding and the importance of coding throughout history and what it means and where it stands today.

In the continuation of the workshop, the pupils were divided into teams: each team was given several problem tasks (rebus, sudoku, Beaver tasks), and after solving them they would receive coded clues that had to be deciphered. After three rounds of tasks and three obtained clues (the clues were: reading, Ivana Brlić Mažuranić and Hlapić), the participants were ready to find the secret book. The secret of the coded book was revealed! Once the book was found, “Čudnovate zgode šegrta Hlapića”, they talked about it and other works of our fairy tale magician and Croatian Andersen Ivana Brlić Mažuranić.

At the end of the workshop, the participants wrote coded messages to the teacher, and they received a certificate for participation, as well as European Programming Week badges. 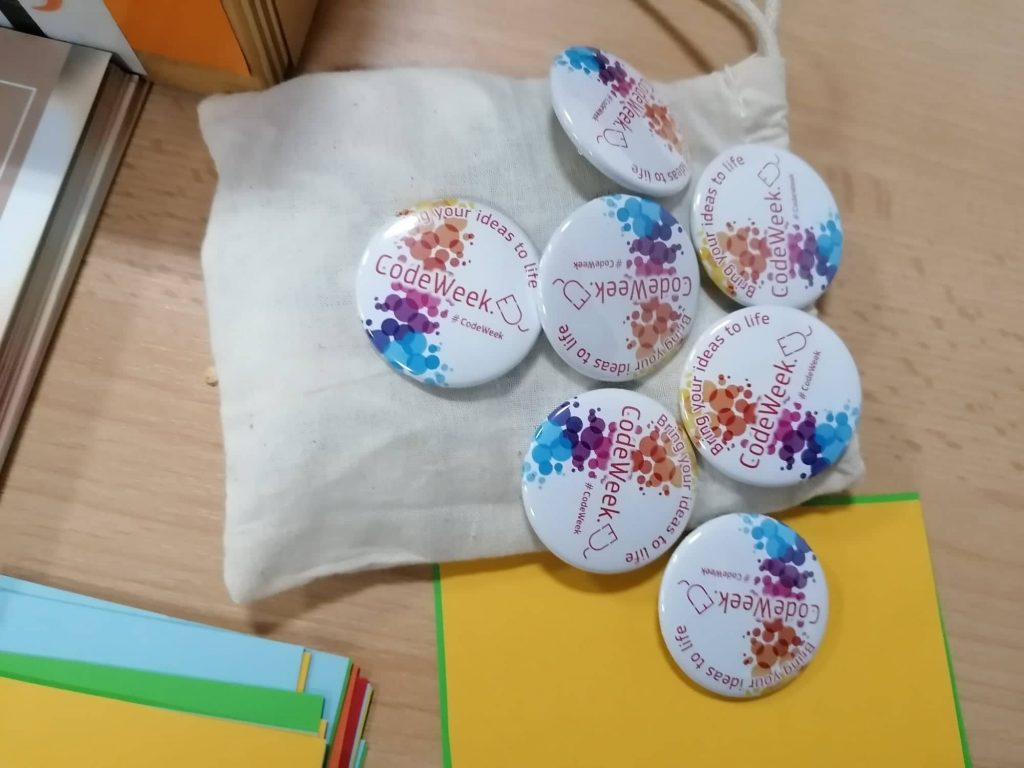 These kinds of workshops are the perfect example of how coding can benefit the pupils and the importance of teaching them these skills from an early age and in an interesting, accessible and enjoyable way. 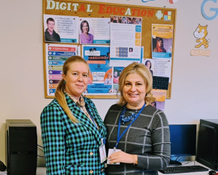