Here in Brussels, the morning started with the launch of the European Coding Initiative, joined by Digital Agenda Commissioner Neelie Kroes. The initiative, backed by the European Commission, aims to position coding within every education system in Europe.

Watch the video below to learn more about the initiative.

Around 1 pm, Code Week stormed the European Parliament in Brussels, thanks to Seán Kelly MEP, who invited CoderDojo to the house. A sizable group of eager aspiring coders bustled into one of the parliament’s enormous committee meeting rooms, accompanied by a number of members of the parliament, followed by a flock of photographers.

What ensued was a lively meeting during which some uncommon sights were to be seen: from elementary school students presenting their inventions in front of a large, attentive audience to seasoned politicians taking coding lessons from kids the age of their grandchildren. 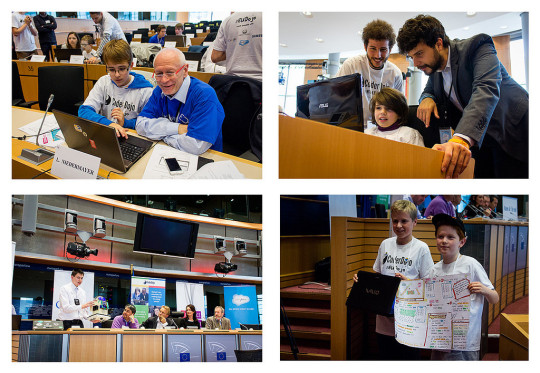 Elsewhere in Europe, Code Week continued in grand style, too. We noticed a truly awe-inspiring number of 2,666 events registered, but more are being added all the time, so by now we are reaching 2,700. Mind you, this is nearly 10 times more than last year!

In the Netherlands, over 60 girls dived head first into coding at a digiVita event organised by VHTO Amsterdam. In Spain, the Catalan website punttic.cat interviewed one of Neelie Kroes’ Young Advisors Alberto Elias. And in Austria, a Mobile Developer After-Work event organised by Mopius is underway.

Great day at #DigiVita #code #event that we (@VHTOamsterdam) organized! over 60 Girls learning how to code! #CodeEU

Debating Europe asks: ‘Do you have to be a genius to code? Or should all Europeans learn?’ We certainly know what our answer is, but what would your take on this be? You can join the debate on DE’s website.

Is #coding for “geeks” or could all Europeans benefit from learning how to code? http://t.co/xE4Gxy7wvE #codeEU pic.twitter.com/E4ZCzdygBT

For a view of Code Week through hazy filters, head over to Instagram. You can find pics snapped in places ranging from Moldova to Luxembourg to Switzerland.