What is it like to organize a coding event? Ask Django Girls!

What is it like to organize a coding event? Ask Django Girls!

You’ve read our guide on how to organize your own coding event, but theory is one thing, practice another.

Don’t take our word for it, head over to the Django Girls blog to find out more about what it was like to organize a workshop for women at this year’s EuroPython, a pretty big and super awesome conference for Python developers.

The first Django Girls took place on Monday on the very first day of EuroPython 2014 in Berlin. We’ve managed to get together an amazing group of 45 women coming from 15 different countries. 15 great coaches showed up to spend their free time before, during and after the workshop teaching our attendees about the Internet, computers, the command line, Python, Django, open source and much much more.

We loved the energy, atmosphere, people and everything about this day. Our expectations were met to the fullest extent. 90% of our attendees finished the whole tutorial and successfully deployed their blogging application to Heroku. You could feel the excitement in the air! It was a challenge to make them stop and go get some rest after 11 (11!) hours of intense programming. 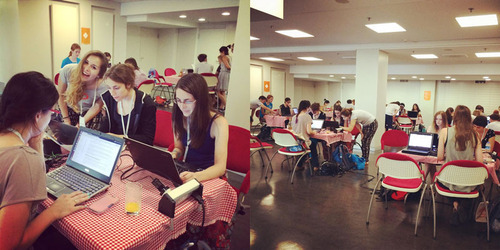 P.S.: If Django Girls sounds like something you’d like to organize in your city for this year’s Code Week, head over to this page. And if Rails is more like your thing, you can also bring Rails Girls to your city.